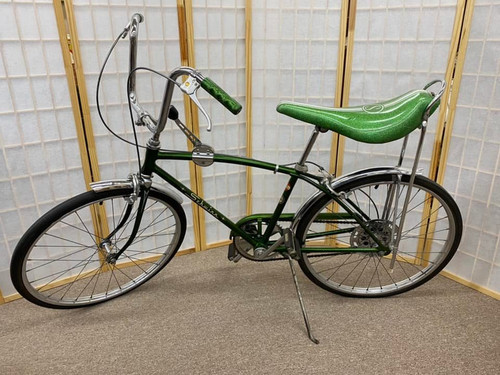 One of Schwinn’s more successful ideas was the creation of the “Muscle Bike” in the late 1960s and early 1970s.

While dad was driving around in his Mustang, or big brother was working on his GTO in the driveway, little brother could be doing wheelies on his Sting Ray or Manta Ray. Not to be out-done by the hood scoop and racing stripes on big brother’s car, Schwinn loaded these bikes with features.  Banana seats, stick shifters, slick racing tires, disc and drum brakes, suspension… these were the coolest bikes.  Wow, a stick shifter… Cool!

This bike is RARE! Schwinn built Manta-Rays for only two years, in 1971 and 1972. These bikes were designed for bigger kids than the Sting Rays, with larger wheels, greater overall length, and a different saddle. Colors the Manta Ray came in: Kool Orange, Kool Lemon, Campus Green, and Silver Mist.

Ethan Allen Cabinet with Conversion Instructions to a Bar